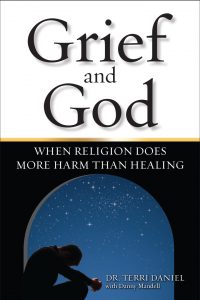 In many religious traditions, God is believed to be responsive to the needs of believers, and in difficult times, the faithful turn to God for comfort and guidance. When God is viewed as a benevolent protector that can shield us from harm, what happens to faith — and healing — when God fails to provide that protection?

In Grief and God, Dr. Terri Daniel explores a range of theological constructs that can inhibit the healing process for those who are grieving a profound loss. Doctrines such as original sin, salvation and eternal punishment in hell can be soul-crushing for someone dealing with loss and trauma. Similarly, the belief that petitionary or intercessory prayer can change the course of events can lead to confusion and guilt when prayers don’t produce the desired results.

“Doctrines of salvation and atonement may offer hope for some people, but for others, they only create cognitive dissonance,” Dr. Daniel explains. “I’ve seen countless cases where certain beliefs — such as eternity in hell for the un-saved, or the ability of prayer to influence events — made mourning far more painful for the griever.”

By the time most of us are adults, it has been proven to us over and over again that the good are not necessarily rewarded and the bad are not necessarily punished. Daniel points out that most Americans grew up with a Sunday school image of God as a protector/punisher, and go through their lives without ever questioning that image. For some, a profound loss or trauma can inspire deeper exploration, but for those don’t – or won’t — question their faith, trying to make that image fit with actual human experience is like trying to put a square peg into a round hole.

The book cites dozens of examples from Daniel’s clinical and teaching experience. One example is from a woman whose teenage son died from leukemia. The mother believed that her son’s illness and death was a punishment from God because she’d had an abortion 20 years earlier. In another example, a 70 year-old man had just been diagnosed with a terminal illness. He was terrified of going to hell for his sins, where he would have to spend eternity with “Muslims, Buddhists and other people who worship false gods.”

“We see no evidence of the punishment/reward model in real life, yet when facing loss and bereavement, this is a huge obstacle for the faithful,” says Daniel. “When traumatized persons cling to the image of God as parent/protector, they often focus their energy on being angry at God for failing to provide the expected protection, rather than on the inner resources necessary for resilience and healing. If they also see God as a harsh judge and punisher, the anger may mix with guilt and fear, further inhibiting the healing process.”-

Posted in Grief, Spirituality and Religion