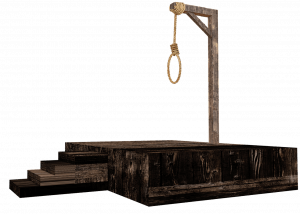 In the wake of the recent trial for Nikolas Cruz, who killed 17 people in the Parkland, Florida school shooting, debate about the death penalty has reached new heights. He was sentenced to life in prison, and there is a loud outcry from those who feel that he should be put do death.

The ACLU has an official statement about its opposition to the death penalty, which you can read HERE. Their points are good, but they fail to address a deeper philosophical question that speaks to an elemental assumption about executing a criminal… the idea that death is a punishment.

If we unpack this idea, it appears to be based on the religious doctrine that a bad person will go to hell, and that will be their punishment. But an enlightened understanding in which there is no hell negates this rationale completely. So what we end up with is a criminal who, via death, escapes actual punishment, and the experience of torment is transferred to his family, who will be grieving his death.

Nikolas Cruz will now spend the rest of his life in prison, where he will experience plenty of suffering and punishment. The other prisoners will certainly find his crime unforgivable, and will treat him accordingly, which is arguably a fate worse than death.