by Boyd C. Purcell, Ph.D.
From Christianity without Insanity 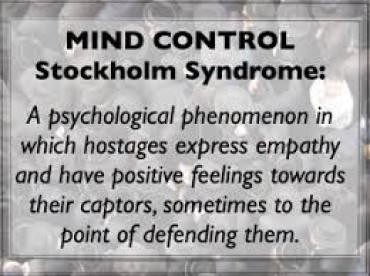 In Stockholm, Sweden in 1973, two ex-cons took hostages during an attempted bank robbery. The hostages were held for a week under fear of death, but were shown small acts of kindness like being given food and water and allowed to go to the restroom. The hostages were rescued by the police, but they noticed rather strange behavior from those who had been held hostage. They did not express anger towards their captors, seemed to identify with their captors, and minimized how bad their plight had been. They also got involved in raising money for their captors’ legal-defense fund. Incredibly, the two women hostages got engaged to be married to the two male hostage takers!

Behavioral specialists, who studied this situation, came to the conclusion that their behavior was consistent with what had been observed in people who had been held captive for longer periods of time in different situations, such as:   prisoners of war, those who had been kidnapped, victims of hijackings, battered wives, abused children, victims of incest, etc. Such behavior of victims became known as “The Stockholm Syndrome.”

Key factors in The Stockholm Syndrome are: Being held hostage through fear of death, having one’s life completely controlled by the captors, any communication coming only through the captors, being shown small acts of kindness such as being given the necessities of life, and hostages believing that escape was impossible. Brainwashing and identification with the captors can happen in only a few days.

Probably the most publicized case of The Stockholm Syndrome is Patty Hearst, who was kidnapped at night at gunpoint by the leftist Symbionese Liberation Army (SLA) in 1974 from her San Francisco apartment.   The goal of the SLA was to overthrow the United States government. The SLA demanded that her wealthy family donate millions of dollars to a Food for the Poor program or their daughter would be killed. They complied but Patty was held prisoner in a closet for two months. She was also emotionally, verbally, and sexually abused. She had never been involved in any kind of crime, but she apparently came to identify with the SLA and their revolutionary cause. Patty made statements and videos in their favor. She was later seen on security video, carrying an assault rifle, while the SLA was robbing a bank.

Months later, Patty was rescued from the SLA by the police but was arrested and charged with armed robbery. At her trial, she was defended by the famous attorney, F. Lee Bailey. He claimed that Hearst was a victim of The Stockholm Syndrome. She stated that she did what she, under coercion, was compelled to do in order to survive. Patty, however, was convicted and sentenced to seven years in prison.

After about two years, she was released on parole.   In 1979 President Carter commuted her sentence to time served. Patty went on to live, as she had done before her abduction, as a law-abiding citizen for the next 22 years. In 2001 President Clinton, in his first day in office, gave her a full pardon.

When people are exposed to a steady diet of preaching and teaching on the wrath of God, they become spiritual hostages. In many Christian churches, people are coerced, under penalty of eternal damnation in hell fire, to accept Christ and live right.   Abusive pastors demand that their followers listen only to them because they are preaching the truth of God while “liberal” pastors, who share the love of God, are preaching Satan’s lie of an easy way to get to heaven. Literalists proclaim that the way to heaven is hard and that Satan deceives people into believing that God is too loving to cast them into eternal hell fire. Though living in abject fear, people are exhorted to be thankful for God’s acts of kindness: life and food to eat, water to drink, and air to breathe, etc. [I am not saying that believers should not be thankful for these things; they can be thankful and still not allow themselves and their children to be spiritually abused.]

Since God has all knowledge, is all powerful, and is everywhere present, they believe that escape is impossible. Many people come to believe in this God of wrath, identify with this abusive theology, and even defend the God of eternal punishment with the excuse that it is justified because God is holy, just, and righteous.

I have called this scenario “The Spiritual Stockholm Syndrome.” If the doctrine of eternal punishment in literal hell fire is true, God is not just, holy, or righteous. The abusers, who are literalists and legalists, have it backward.   The fact that God is holy, just, and righteous is exactly why God will not torture people at all, much less forever!

Another application I have made of “The Spiritual Stockholm Syndrome” is “The Christian Shotgun Wedding.” This is based on the analogy in the Bible of believers in Jesus being “The Bride of Christ,” which is an expression of a loving relationship with our loving Lord. This would make perfect sense if no person were forced or coerced into becoming Christ’s “bride.“ The big problem is that many people become and continue to be Christians only due to threat of eternal conscious torment [ECT] in literal hell fire.

For example, the pastor of an Evangelical Church stated very emphatically that if he believed in universal salvation, as I do, he would go out and have “a good time!” Based on his statement of preferring to commit spiritual adultery, I asked him with what kind of sins he would like to be unfaithful to Christ, sins of: lying, cheating, stealing, drinking, drugging, rape, robbery, murder, etc. Realizing how spiritually foolish his rash statement had been, he looked down at the floor, hung his head, and refused to answer the question. Sadly and tragically, millions of people who identify themselves as, “Bible-believing Christians” only became Christians, “the bride of Christ,” and remain superficially faithful due to the horrific threat of ECT in hell.

This concept of “The Christian Shotgun Wedding,” is based on a cultural practice in a bygone era of what happened when a young man got a young woman pregnant but refused to marry her. The cultural mindset was, “If you play, you pay!” Thus, the woman’s father would take his shotgun in hand and pay the young man a visit threatening to blow his head off if he did not do “the right thing” by his daughter and marry her. Men in this situation, due to fear of death, apparently always capitulated to being bound in “holy [or unholy] matrimony” [holy wedlock vs. unholy deadlock] with the woman. Fear of death is terrible, but fear of Father God’s “Shotgun” [ECT] is infinitely worse!